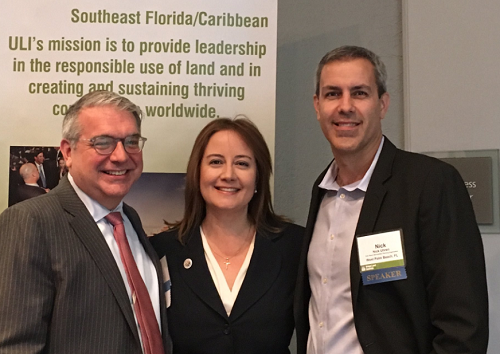 The three South Florida MPOs (Miami-Dade, Broward, and Palm Beach) were recently featured in a Miami Today news article. Broward MPO Board Chair Richard Blattner recently spoke at the 40th Anniversary Celebration of the Miami-Dade TPO, and he was quoted in the article. An excerpt of the article is below.

Transportation authorities say a new era of cross-county cooperation is driving the push for transit solutions. “First of all, we’re here,” Richard Blattner, chair of the Broward County Metropolitan Planning Organization. “We’re not here to compete with you. The three counties are working together like never before.” Speaking at a March meeting of the Miami-Dade Transportation Planning Organization (TPO) that celebrated the organization’s 40th anniversary, Mr. Blattner called its Strategic Miami Area Rapid Transit plan “bold, challenging, and innovating.” The plan identifies six corridors for transit improvements, the modes of which haven’t yet been determined. “But we saw that a couple of your corridors [the northeast, along the Florida East Coast Railway tracks, and the north, along Northwest 27th Avenue] end at the Dade-Broward line,” he said. “They can’t end at the Dade-Broward line. They have to go beyond that. So we’ve determined that we can’t be traditionalists anymore; we have to be game-changers. We have accelerated our thinking and changed the way we look at this. Palm Beach is doing the same.”